BACK TO THE STATE TOURNAMENT: 1A power Chewelah, now takes on 2B foes in softball postseason 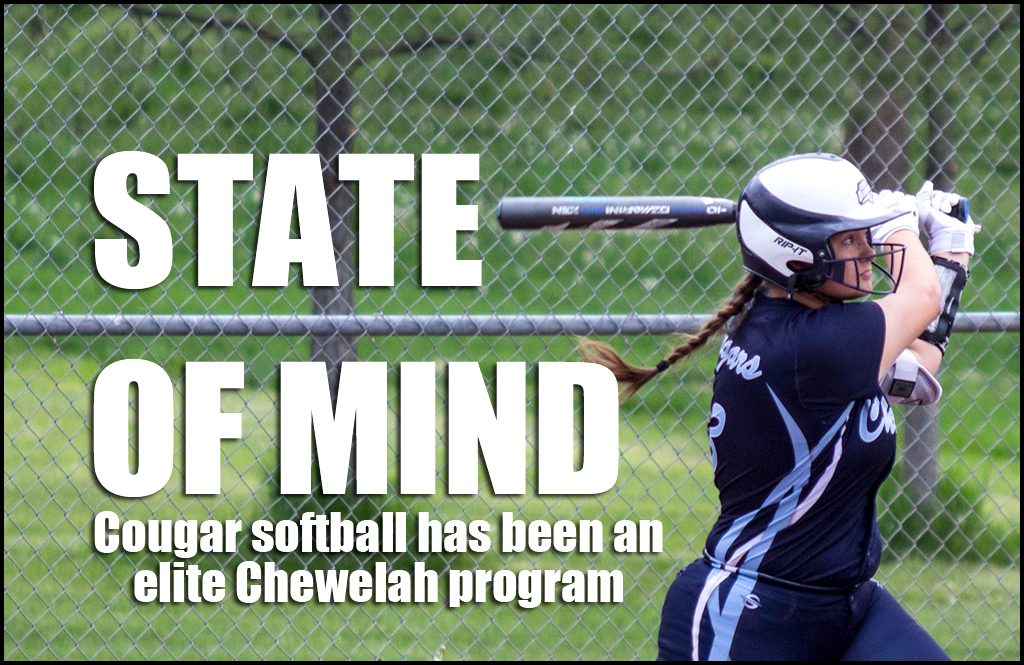 Baylee Sobosky leads the team in RBI and is tied for the lead in HRs. (Brandon Hansen graphic)

Yes, softball, while most people struggle to pronounce the name of the town, the navy blue unis of the Cougars are becoming a common sight at blistering hot state tournaments in the Columbia Basin.

With two straight fifth place finishes at the 1A state softball tournament, the Cougars have one of the best pedigrees out of any Chewelah sports program heading into the 2Bs. This year has been another successful campaign with the Cougars racking up a 13-7 record overall and a 10-2 record against 2B squads. 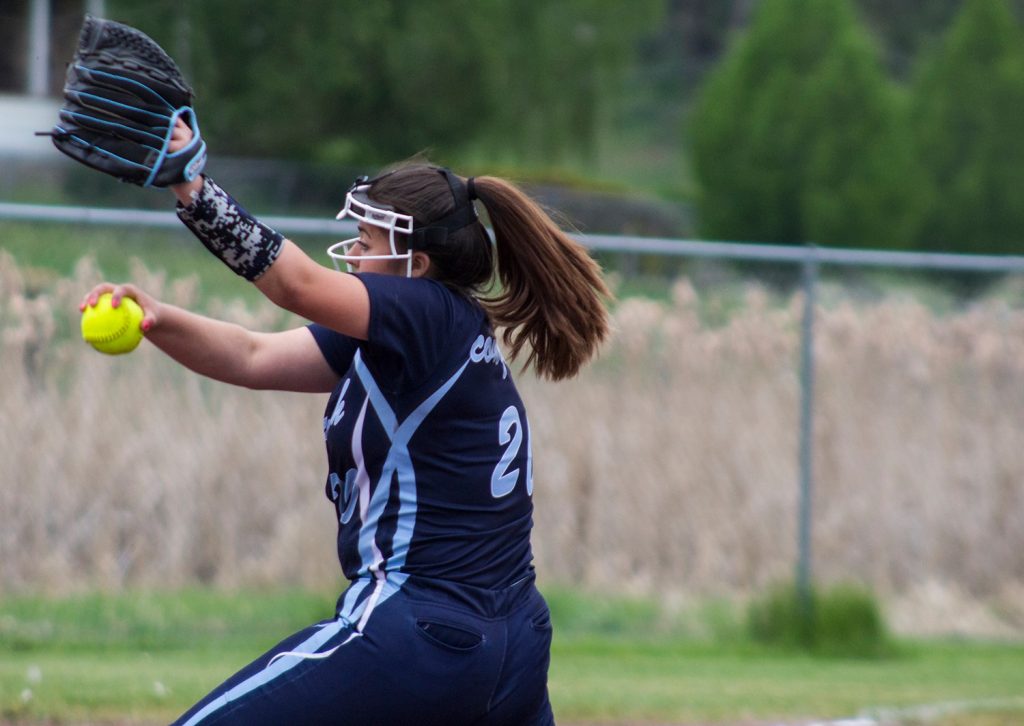 Abby Fuller has been a solid pitcher for the Cougars this season. (Brandon Hansen photo)

What was perhaps remarkable about Chewelah’s success in the 1As was that it was in the softball-crazed NEA League which had several softball powers and programs. Despite being practically the smallest school in the 2Bs, the Cougars have developed into a bonafid point of pride for the community.

On Tuesday, the Cougars downed Lind-Ritzville-Sprague 11-2 in the first round of the District 7 2B softball tournament on the red rock field in Chewelah. This Saturday they will be playing Colfax in the next round at 1 p.m. at Franklin Field in Spokane. Chewelah coach Tom Skok was excited about the first round matchup against LRS since they were in the state tournament last year.

“They were state participants last year so I think they may have a little fuel left in the tank still but looking at scores with similar opponents, we should have them out-manned,” Skok said before the game.

A Baylee Sabosky three-run homer during the matchup proved this as Chewelah pulled away and kept the team from the south at bay. The previous Tuesday, Chewelah swept Kettle Falls and Skok said the team was able to work through some issues that batters had been having at the plate.

The team’s biggest strength this year has been defense and Skok pointed out that even against teams that have defeated them, Chewelah has played solid against them.

“I think our defense will continue to help us stay in/win games,” Skok said.

At the plate, the Cougars have four full-time players hitting over .400 with Maddy Koler notching a .459 average to go with her four home runs, 27 RBI and eight doubles. Baylee Sabosky is hitting .457 with four home runs, 34 RBI and six doubles. You’ve heard of the Oakland Athletics “Bash Bros.” but it appears Chewelah has their own “Slam Sisters.”

Power can be important in the state tournament where games can turn on the dime of an extra base hit or a home run.

According to Max Preps, Chewelah is currently ranked No. 10 in the state. NWC is No. 2, Colfax is No. 3 and Liberty is No. 6 in the state meaning that this Saturday’s district tournament could almost be more difficult than the actual state tournament. The No. 1 team in the state is Adna, a program from Lewis County that has won several state titles and is 20-1 on the year.

What the Cougars will have to do is overcome adversity and they’ve already done some of that this year. With slated starting pitcher Larissa Sweat getting injured in basketball season, Chewelah had to turn to the pitching services of Abby Fuller and Leah Carpenter in certain games. Fuller has been a rock this year in the circle and Carpenter has provided valuable breaks for Fuller. Skok appears to be determined to have some pitching depth in a classification where some teams might barely have one pitcher who can throw strikes for a team.

This will come in handy in a tournament format. Fuller comes in with a 2.85 ERA with 99 strikes and averages just over one base runner an inning. Leah Carpenter has struck out 18 batters in 18 innings of work.

Then there are the other features of the fully-loaded Chewelah softball program. Bailey Smith, who seems like she’s been playing for the Chewelah softball program for about eight years, is hitting .443 on the year, can slap bunt, beat out infield plays and overall is a positive senior leader for the squad. Becca Bennett double-times as a state golfer for the Cougars and a softball player who is hitting .314 on the year with 11 RBI.

College-bound Kennedy Robison is hitting .379 on the year and her hits usually count as she has driven in 22 runs and has six doubles on the year.

Leah Carpenter can seemingly do everything on the field. She’s hitting an incredible .453 on the year with 15 RBI and two home runs along with six doubles.

If you want to get a first-hand look at one of Chewelah’s top exports, check out the softball team tomorrow at 1 p.m. at Franklin Field. 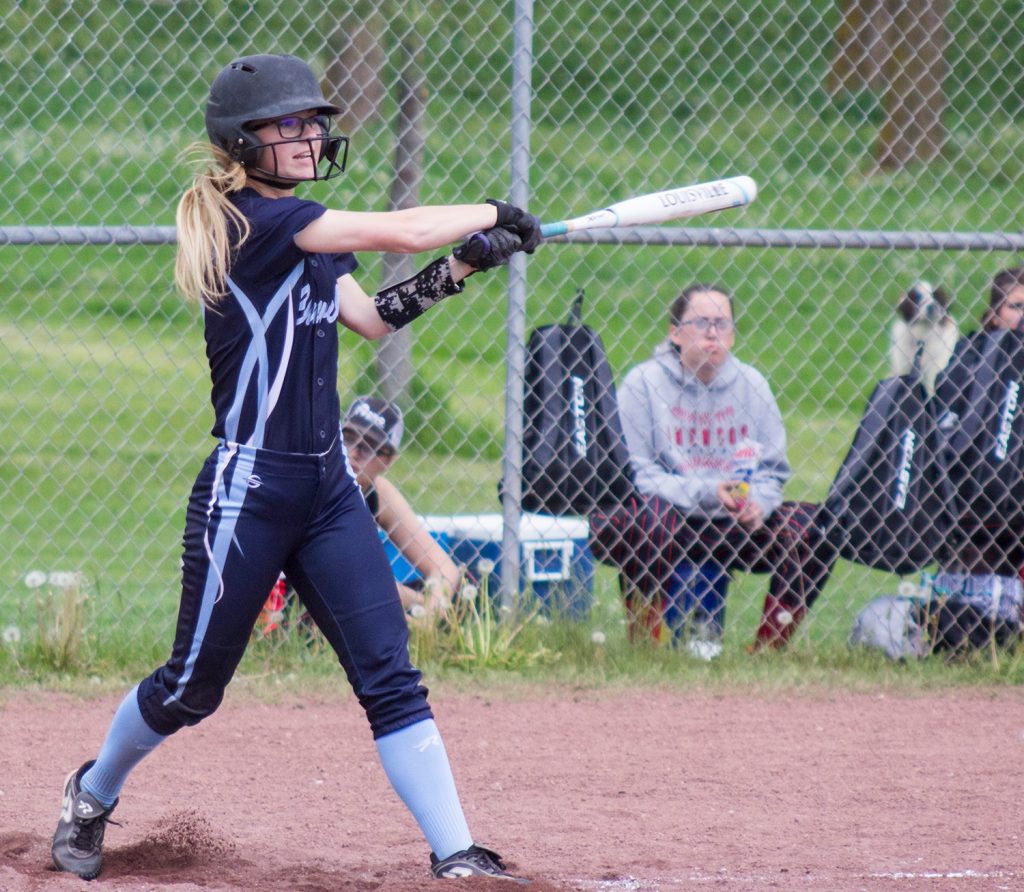 Leah Carpenter has been one of Chewelah’s top hitters this year. (Brandon Hansen photo)