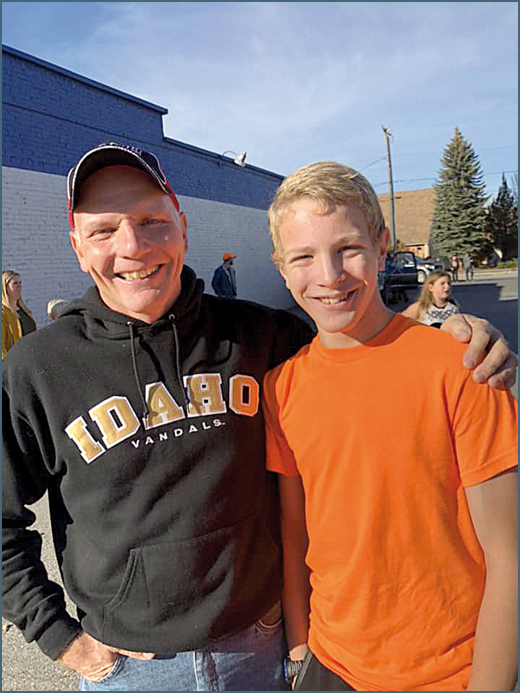 Over the weekend, Doug and Travis Falstad did a bit of tracking to find a missing dog in the Addy area.

According to Sharon Stumpf, the two heroically took time out of their day to find a 15-year-old dog owned by a Stevens County resident named Steve.

Steve had knocked on the door of the Falstad’s Addy farm at 7:30 a.m. Saturday and told Doug that his 15-year-old dog, Mister, had a seizure in his car. Steve pulled the car over on Marble Valley Road and got stuck in the ditch.

While trying to get the car unstuck, Steve was distracted as Mister wandered off.

“[Son] Travis and I had to go over to one of the other farms to load out hay,” Falstad said. “I told Travis on the way back that we were going to look for the dog.”

Falstad and Travis started out where Steve got stuck and found dog tracks through the snow. They spent a half hour tracking him across a field and plow furrows.

“Plow furrows were the worst,” Falstad said. “Snow is flat and level but plow furrows aren’t. We would be walking along and all of a sudden we would sink into two feet of snow.”

They found Mister on the other side of the field below the road. They shuffled their feet to build a trail for the dog since he didn’t walk so well.

“The owner was waiting for us on Marble Valley Road driving around looking for the dog,” Falstad said.
Steve greeted his lost dog with tears of happiness.

“The dog walked right up to the car door and waited to be helped in,” Falstad said. “I don’t think he is going to wander off again anytime soon.”

Both Doug and Travis said they were thrilled to find the dog alive and return him to the owner. They said they would have tracked him all day if they had to as they were pretty determined to find Steve’s friend.

‹ District deals with budget shortage, lays off some staff › FROM THE EDITOR: Chewelah’s bid for a tech giant HQ