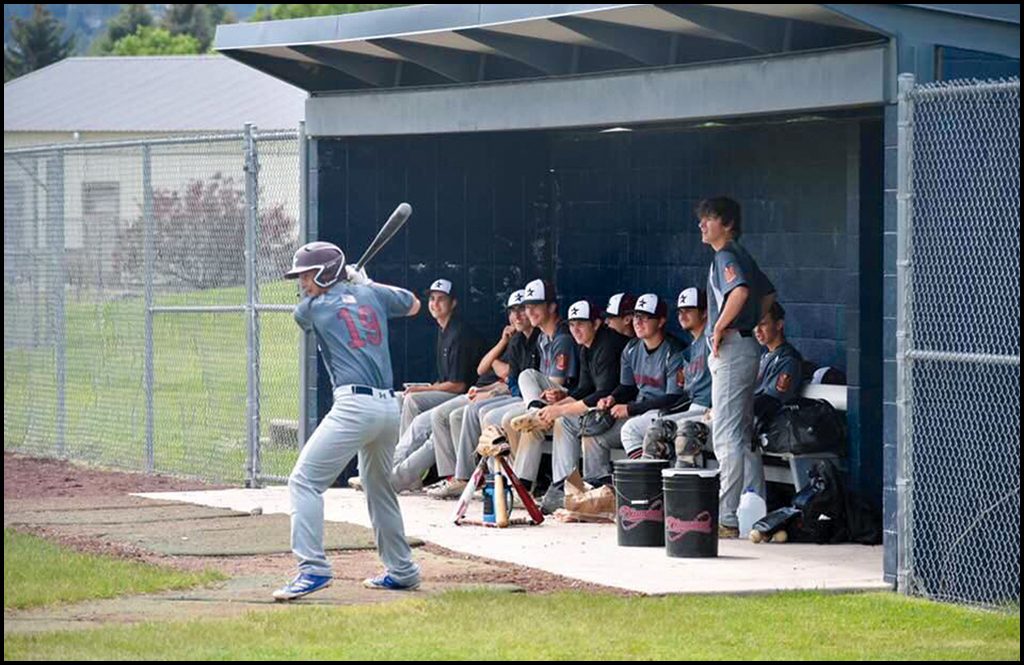 The Northstars improved their record to 14-13-1. (Courtesy photo)

GOING SOUTH: Northstars enjoy a trip to Oregon, pick up some victories along the way in state capitol…

The Spokane Northstars won three of their six games in Salem, Oregon last week on the campus of Willamette University, placing fourth overall in the tournament. They defeated two teams from Portland and another from Beaverton during the four-day event (One game ended in a tie). Their two losses were to the Vancouver Mavericks and Salem’s Withnell Dodgers.

“We had only 11 players for this tournament, but they all fought hard,” said Coach Eric Krausz. “The guys are learning how to play seven full innings of baseball, no matter what the score is.
“Our best game was the one that ended in a tie when the two-and-a-half hour time limit ran out. We were behind and fought back late in the game to salvage a tie.”
The Northstars return to league play at Shadle Park’s Jackson Field this week.

Northstars 8, Madison 6
Elan Krausz’s walk-off triple into the leftfield corner climaxed a five-run rally in the bottom of the seventh inning as the Northstars came from behind to defeat the Madison Senators from Portland 8-6 on Thursday afternoon.

The Northstars trailed 6-2 going into their final at-bat, but unleashed a five-hit flurry that climaxed with the triple from Krausz. The rally started with back-to-back doubles from Tayeb Wilson and Zak Kubik that produced the first run. A single from Broc Houser and a double from Jayson Link knotted the score with two Northstars on base. Krausz then cleared the bases with the triple into deep left field for the win.

The win came on the heels of a disastrous 17-2 loss to the Withnell Dodgers from Salem on Wednesday.

The Northstars fell behind 4-2 after four innings. A double by Jay Link (son of LaLee Jeanneret Link) followed by singles from Krausz and Lukas Kubik tied the score at two runs each in the second inning. Broc Houser singled and scored in the fifth inning, but the Northstars were still on the short end of a 6-3 score going into the final inning.

Johnny Larson earned the win on the mound for the Northstars in relief of starter Justin Rollis. Larson threw the last two innings without surrendering a run.

The Northstars got two hits apiece from Krausz, Link, Houser, Lukas Kubik, and Tayeb Wilson. Also swatting hits were Zak Kubik and Larson. They outhit the Dodgers 12-7, with five of those hits coming in the final inning for the win.

Northstars 6, Beaverton 1
Andrew Sweat threw a two-hitter on Thursday afternoon as the Northstars defeated Beaverton 6-1 for their second win of the tournament. The Northstar lefty threw all seven innings, striking out seven Beaverton batters while walking only one.

The Northstars used four consecutive singles from Lukas Kubik, Carl Oman, Elan Krausz and Zak Kubik to take a 2-0 lead in the third inning. A single by Tayeb Wilson and a double off the bat of Broc Houser kept the Northstars ahead 4-1. Zak Kubik and Wilson swatted singles in the sixth inning that produced two more runs for the 6-1 victory.

The Kubik brothers, Houser and Wilson each finished the game with two hits. Johnny Larson had two runs batted in.

Northstars 12, NW Stars 2
Zak Kubik went 3-for-4 at the plate with three runs batted in and three other Spokane players each swatted two hits on Saturday afternoon when the Northstars used a dozen hits to score a dozen runs in a 12-2 victory over the Northwest Stars from Portland. The win was their third in four games for the Northstars, who also battled to a 9-9 tie with the Kaiser Crushers that morning.

Colville’s Tayeb Wilson earned the win on the mound for the Northstars. He threw the first four innings, allowing four hits and two runs while striking out two. Carl Oman threw the fifth inning, yielding no runs to end the game early on the 10-run rule.

Selkirk’s Jay Link singled and scored in the first inning to give the Northstars an earl 1-0 lead. A bases-loaded triple by Lukas Kubik in the second inning followed singles by Elan Krausz, Zak Kubik and Oman to widen the lead to 4-0. Consecutive singles by Lukas Kubik, Link and Krausz in the fourth inning added two more runs for a 6-2 Northstar lead.

A two-run single by Andrew Sweat and a double from Zak Kubik in the fifth inning gave the Northstars the 10-run split they needed to bring the game to an early conclusion.
Krausz, Link and Lukas Kubik each contributed two hits to the win.

Northstars 9, Kaiser 9
Baseball fields have scoreboards, not scoreclocks, because games are not timed. That does not apply to baseball tournaments, however. The Northstars and the Kaiser Crushers battled to a 9-9 tie on Saturday morning after eight innings of play because of time constraints.

Behind 9-3 after five innings, the Northstars rallied for six runs in the bottom of the sixth inning to knot the score. When neither team scored during the next two innings, the game was ended so the next one could start on time.

The Northstars used a five-hit barrage to even the score. Singles from Carl Oman, Johnny Larson, Cole Davis, Tayeb Wilson and Jay Link provided the hits needed to lift the Northstars out a six-run deficit. Unfortunately, they left the go-ahead run on third base.

The Northstars had the bases loaded in the seventh inning, but could not get a runner batted in. They also had a runner on base in the eighth inning that they could not get home.
A double by Andrew Sweat, plus singles from Oman and Larson, generated three Northstar runs in the second inning. Sweat doubled again in the fourth inning and was moved to third base by Larson’s single, but he was stranded there.

Larson batted 3-for-4 with a run scored and a run batted in. Wilson also had three hits, batting in two runs and scoring one. Elan Krausz, Oman, and Sweat each had a pair of hits.
Davis threw the last four innings, allowing no runs and two hits. He struck out three Crusher batters.

Withnell 17, Northstars 2
The Northstars finished the game with only four hits on Friday evening when they lost their first game of the tournament 17-2 to the Withnell Dodgers. Carl Oman, Zak Kubik, Tayeb Wilson and Lukas Kubik batted their way on to base. Zak Kubik and Oman each batted in a run.

Vancouver 13, Northstars 0
Carl Oman, Justin Rollis and Lukas Kubik had the only Northstar hits Sunday afternoon when they were shut out 13-0 by the Vancouver Mavericks in the battle for third and fourth places in the tournament.