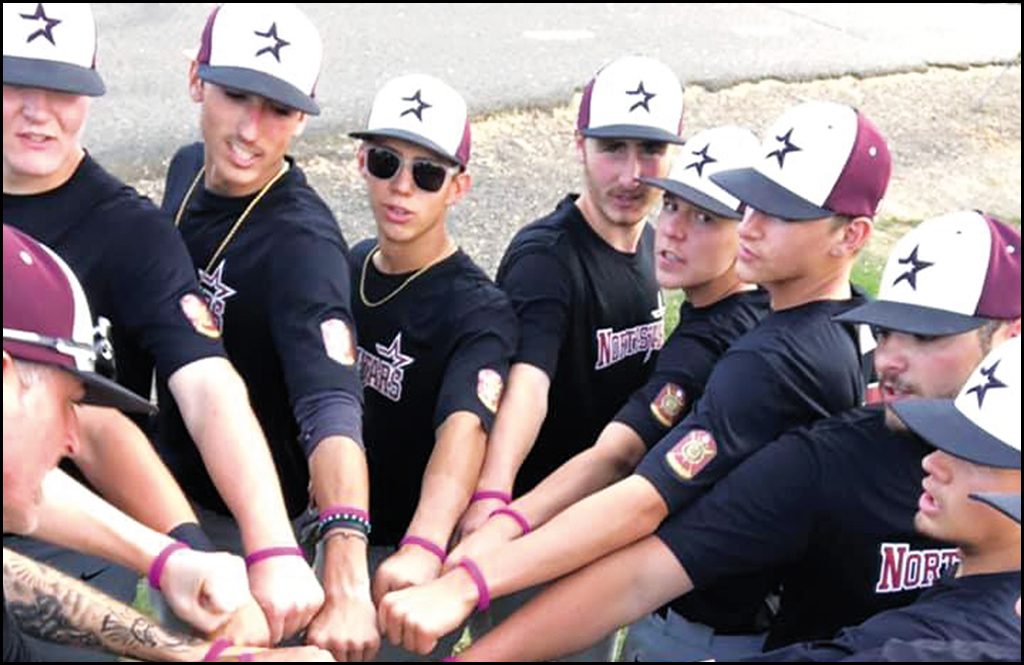 The Spokane Northstars sent some love over the Chataqua weekend, sporting these wristbands in honor of the Mike Carpenter Memorial Tournament. (Courtesy photo)

AAA American Legion teams need to have a full stable of starting pitchers and a bullpen full of relief pitchers when they compete in a tournament in which they play five or six games over a four-day weekend. Some teams are able to fortify their roster with enough chuckers to fill the schedule through Sunday’s final games. Some may not, depending on how many games they have to play.

The Spokane Northstars came up short in Kennewick last Sunday. They had to remove Carl Oman’s catcher’s gear and put him on the mound to finish that afternoon’s final game. Hopefully, Oman will be able to continue wearing his mask, chest protector, and shin guards this weekend when area AAA teams meet for the district championship.

Spokane’s six AAA American Legion teams will gather at Jackson Field on the Shadle Park High School campus to decide the district’s four entries into the upcoming state tournament. The Northstars have been seeded fourth in the four-day event and will open play on Friday evening at 5 p.m. against the Mt. Spokane Wild, a team they have defeated twice during the league season.

Considering all of the tournaments the Northstars have competed in this summer in Oregon, Montana and Washington, they should have the experience to earn one of those four tickets to the state finale. That is, if pitching can hold up through Sunday.

Walla Walla 10, Northstars 8
The Spokane Northstars lost a heartbreaker on Thursday in Walla Walla as the host Bears came from behind to score three unanswered runs in the seventh inning to savor a 10-8 win. The Northstars held a slim 8-7 lead going into Walla Walla’s final at-bat, but they were unable to slam the door on the Bears.

Elan Krausz led the Northstars at the plate with three hits, including a solo home run over the left field fence in the second inning. He hit a pair of singles later in the game, the second of which batted in the leading run in the bottom of the fifth inning to give the Stars their 8-7 lead.

Andrew Sweat also homered for the Northstars, walloping a three-run blast over the right field fence in the fourth inning that cut Walla Walla’s lead to 7-6.

Carl Oman hammered two hits and scored a pair of runs for the Stars. Brandon Moore had the only other hit.

Expos 4, Northstars 3
An infield error in the bottom of the final inning allowed the winning run to score on Friday morning to give the Spokane Expos a 4-3 win over the Northstars. The Stars held a 3-0 lead going into the last at-bat for the Expos but were unable to hold onto it. Three Northstar muffed ground balls allowed the Expos to tie the score at three runs apiece and then bring home the winning run.

A single by Elan Krausz and a double from Andrew Sweat put the Northstars on the scoreboard first. Jay Link’s sacrifice fly gave Sweat time to tag up and score from third base for a 2-0 lead. The Stars did not score again until Krausz hit a line drive single into right field in the seventh inning that brought Broc Houser home for a 3-1 lead.

Krausz had two hits, scored a run and batted in a run. Sweat hit a double, scored once and had an RBI. He now leads the Northstars in RBIs with 31. Oman also hit a double, lifting his batting average to .370.

Cole Davis started on the mound for the Northstars. He threw five innings, scattered five hits and did not allow an earned run.

Northstars 11, Rainiers 6
On Friday evening, the Northstars overcame a nightmare third inning to defeat the North Seattle Rainiers 11-6. The Stars were ahead 5-0 going into the bottom of the inning when a sudden outbreak of walks invaded the pitcher’s mound. Five walks, an error and one solitary single put six North Seattle runs in the scorebook. The Stars recovered quickly with six runs of their own over the next four innings to claim the win.

Tayeb Wilson’s single returned the lead to the Northstars in the fourth inning when his single brought home two baserunners for a 7-6 advantage. A single by Sweat and a double from Wilson added three more runs in the sixth inning. Doubles by Brandon Moore and Sweat along with a single by Zak Kubik gave the Stars the final run of the game in the seventh inning to keep the Rainiers in the rearview window.

The Northstars got on the scoreboard first when Krausz singled and scored in the second inning. Singles from Lukas Kubik and Sweat, along with a two-run double by Krausz into the left field gap, gave the Stars their early 5-0 lead.

Sweat and Wilson both finished the game with three hits and combined for five runs batted in. Krausz had two hits and a pair of RBIs. Altogether, the Stars swatted a dozen hits, including five doubles.

Jay Link was the game’s winning pitcher. He threw five and a third innings, striking out five Rainier batters. Carl Oman earned the save in relief.

Northstars 4, Southridge 3
Andrew Sweat’s double into right field brought home the winning runs as the Northstars came from behind to upend the Southridge Bandits 4-3 on Saturday afternoon.

Elan Krausz triggered the late rally with a leadoff bunt single down the third-base line. Zak Kubik followed with a frozen rope single into right field to give the Northstars a pair of baserunners with no outs. Both sprinted home on Sweat’s two-bagger into the deep right field gap. The two runs held up in Southridge’s final at-bat when Northstar pitcher Broc Houser notched a strikeout with two Bandits on base to end the game.

The Stars trailed 3-0 going into the bottom of the third inning when Carl Oman hammered a triple to the left field fence and then scored on a wild pitch. Houser then singled up the middle, and Brandon Moore moved him into scoring position with a bunt single down the third base stripe. Houser scored on a single over second base by Lukas Kubik to whittle the Bandit lead to 3-2, and that score remained until Sweat’s double moved the lead to the Star side of the scoreboard.

Sweat also earned the win on the mound. He threw six innings, allowing six hits and one earned run.

Southridge 9, Northstars 5
Results were reversed on Sunday when the Northstars met Southridge for the second straight time as the Bandits avenged the previous day’s loss with a 9-5 win. The Stars held their own through the first five innings, but the Bandits put five late runs in the scorebook to nail down the victory.

The score was tied at two runs apiece after three innings. A single brought home two Northstar runs in the opening inning. Southridge responded with a run in the second inning and another in the third to knot the score.

The Northstars did not score again until their fifth trip to the plate. By that time, the Bandits had taken a 4-2 lead. Lukas Kubik doubled into centerfield and came home on a sacrifice fly by Brandon Moore to narrow the Southridge lead to 4-3.

Dom Coleman was hit by a pitch and scored on Lukas Kubik’s second double of the game in the final inning. Kubik then came home after tagging up on a sacrifice fly by brother Zak. However, the Stars were unable to come up with enough runs in the later innings to match the output of the Bandits.

The Northstars finished the game with only five hits, two apiece by Lukas Kubik and Moore and one by Zak Kubik. In the opposing dugout, the Bandits had 15 hits with most coming in the last two innings to secure the win.