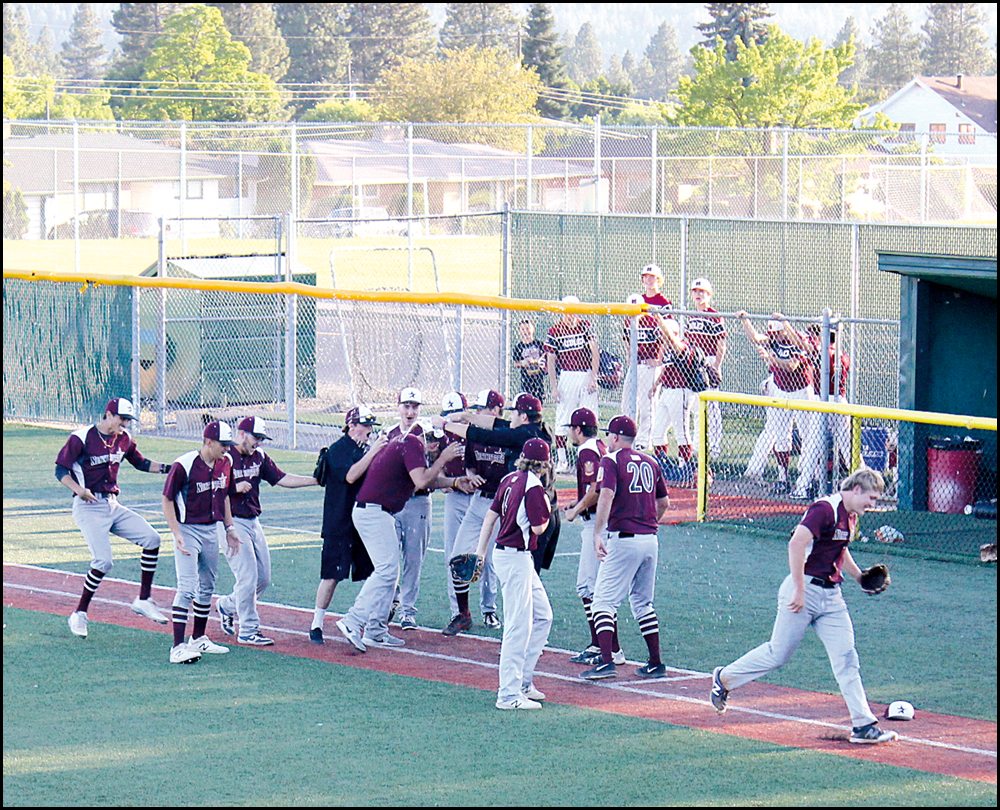 The Spokane Northstars kept the potential tying and winning runs on base in the bottom of the final inning as they held on to defeat the Shadle Park Shockers 5-4 in the championship game of the Spokane American Legion AAA District Tournament on Sunday. First baseman Zak Kubik gloved a fly ball for the concluding out, leaving the two Shocker runners stranded.

With the score tied at four runs apiece going into the last inning, Carl Oman hit a sacrifice fly that brought Broc Houser home with the winning run. Houser had doubled and gone to third base on a wild pitch to be in position to tag up and score the game changer on Oman’s fly ball into centerfield.

“I’m super proud of what these guys have accomplished,” said Coach Eric Krausz. “They are definitely peaking at the right time. These guys are selfless. They have a team mentality. Everyone puts the team first. Everyone contributes to the team. That has been the thing that has made us so successful.”

With the win, the Northstars earned the district’s number one seed into the upcoming state tournament. Shadle Park also got its state ticket punched, along with Mt. Spokane and the Spokane Bandits, as they earned the Spokane district’s other three entries into the state finale.

This year’s state AAA tournament will be held in Bellingham and Anacortes. It will be a 16-team double-elimination event on July 27 through August 1.

The title game stayed close from start to finish, with the Northstars remaining one run ahead through most of the seven innings. Shadle Park knotted the score twice, but the Stars always scored the go-ahead run. 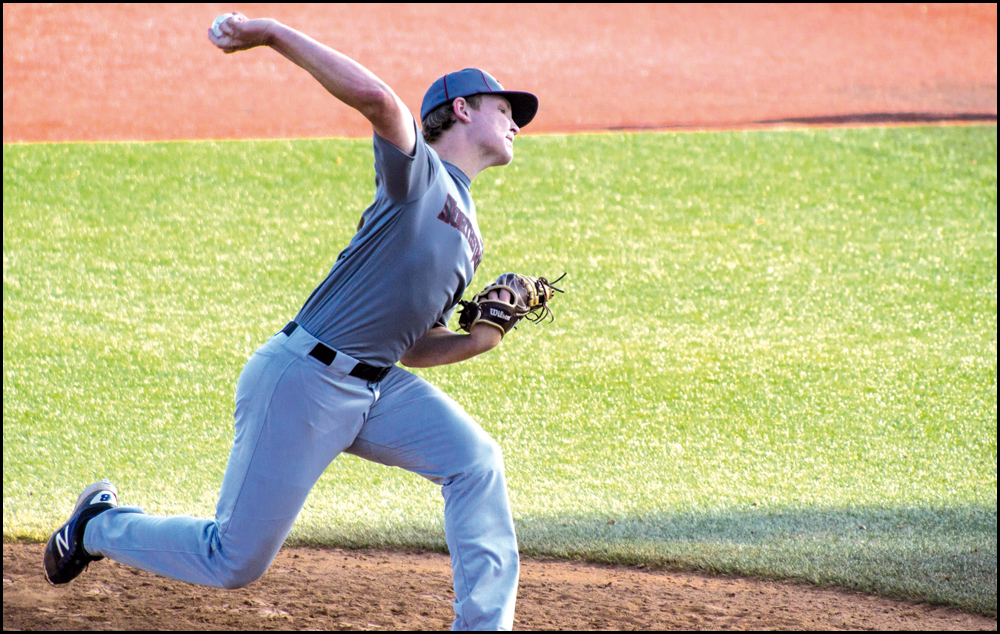 The Northstars struck first. Singles by Lukas Kubik, Justin Jones, Broc Houser and Zak Kubik produced three runs. The Shockers caught up in the fourth inning, knotting the score at 3-3.
Jones scored the go-ahead run for the Northstars in the top of the fifth inning. He was walked, was bunted over to third base by Houser, and came home on a wild pitch to give the Stars a 4-3 lead.

Again, Shadle Park scored the tying run in the bottom of the inning.

The score remained even until the top of the seventh inning. That is when Houser hammered a double into the leftfield gap. He advanced to third base on a wild pitch and was poised to score the winning run. When Oman hit the fly ball to deep centerfield, Houser tagged up and beat the throw to the plate for a 5-4 Northstar lead.

“Broc is not a big kid, so Shadle played him really shallow,” said Krausz. “So, Broc just hit the ball over the head of the centerfielder.”

The Shockers had one more at-bat. They put runners on first and second bases with two outs, but Kubik’s catch along the first-base line ended the threat, giving the Northstars their 5-4 victory and a district pennant.

“It was just a routine catch for Zak,” said Krausz. “He just stepped back and caught the ball at the edge of the grass.”

Cole Davis was awarded the win on the mound for the Northstars. He came out of the bullpen to throw the last two innings, yielding no runs or hits. Jay Link was the starting pitcher and threw the first five innings.

Houser batted a perfect 3-for-3 and scored twice. Zak Kubik and Oman each batted in two runs. 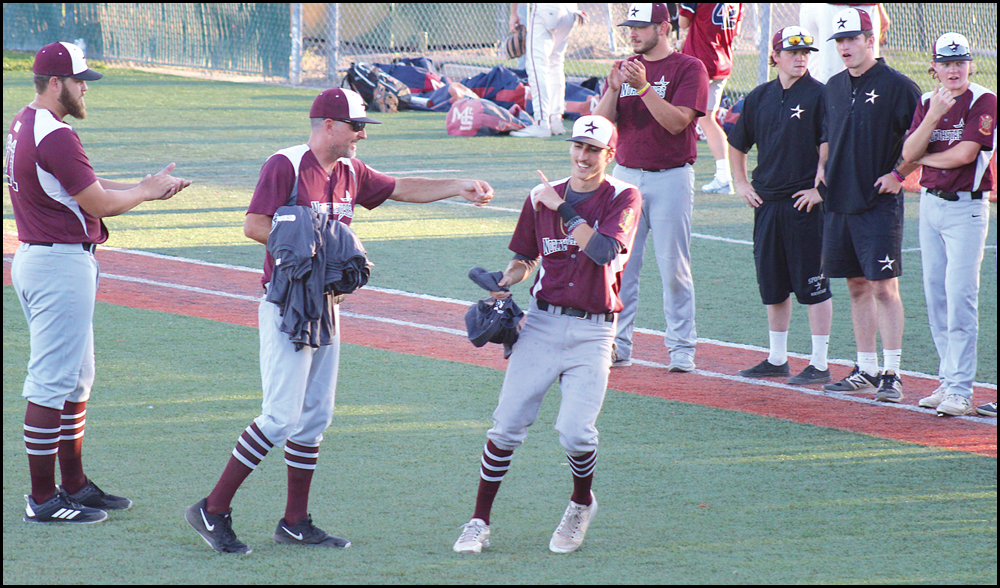 Hits by Carl Oman, Lukas Kubik, and Tayeb Wilson provided the punch needed by the Spokane Northstars as they came from behind to defeat the Mt. Spokane Wild 6-4 in the opening round of the American Legion AAA Tournament on Friday night.

The Northstars trailed 4-2 going into the fifth inning. A walk given to Johnny Larson and a bunt single down the third base line by Kubik gave the Stars two baserunners. A single by Oman loaded the bases with one out. Wilson’s double into rightfield brought Larson and Kubik home to tie the score at four runs apiece. A Mt. Spokane infield error allowed Oman and Wilson to come home with the game-winning runs for the 6-4 triumph.

The Northstars finished the game with only five hits. Up until the turning point fifth inning, a double by Justin Jones was their lone hit of the game. Jones scored to give the Stars a 2-0 lead in the top of the fourth inning. The first run came on a bases loaded walk issued to Zak Kubik that sent Oman home.

Andrew Sweat was the winning pitcher. He threw five and two-thirds innings, striking out eight and allowing two earned runs. Cole Davis finished the game on the mound without yielding a hit or a run to earn the save. 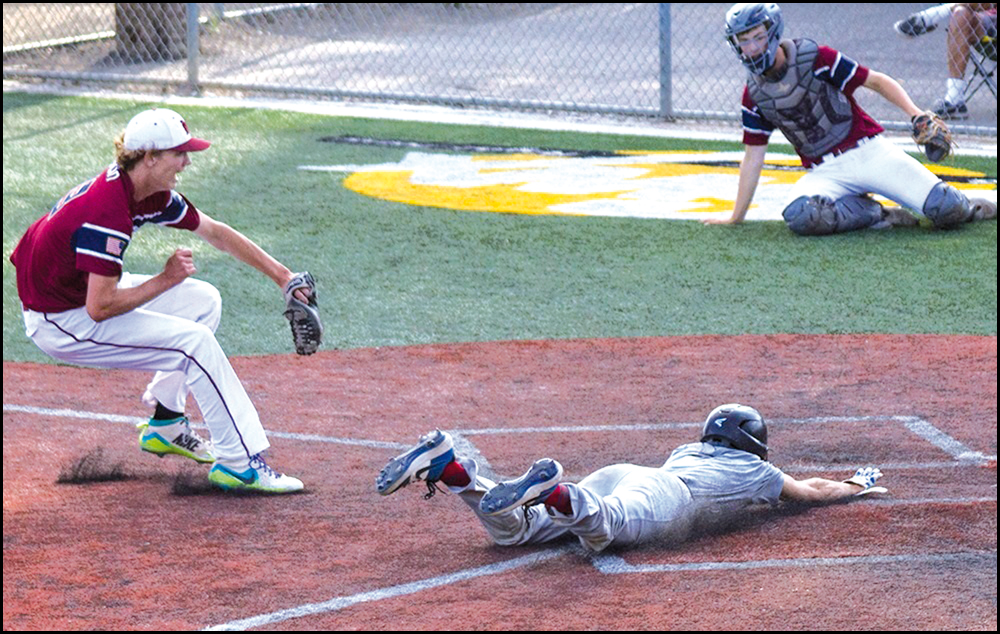 Northstars 11, Bandits 6
A six-run second inning vaulted the Northstars into an early lead and they withstood threats through the middle innings to defeat the Spokane Bandits 11-6 in Saturday evening’s district semifinal game.

Northstar catcher Carl Oman gave a clinic both at the plate and behind it. He batted 3-for-4 and scored two runs to lead a 10-hit performance at the plate by the Stars. He also picked off two Bandit baserunners, one trying to steal second base and the other taking a lengthy lead off first base.

Lucas Miracle from Canada also had a three-hit game for the Northstars, including a two-run triple into the rightfield corner that brought home two runs. Zak Kubik used a double and a triple to bring home two more runs. Elan Krausz hit the third Star double of the game and scored a run.

Oman scored the first run of the game. He doubled down the leftfield line and came home on a single over second base by Tayeb Wilson. A single by Oman, a double by Kubik and Miracle’s triple were the decisive hits in the second inning that added another six runs to the Northstar side of the scoreboard for a 7-1 lead. Cole Davis scored from third base in the third inning on a pitch that got past the Bandit catcher to add on another Star run.

The Bandits shrank the score to 8-6 through the middle innings with a pair of two-out rallies, but the Northstars refused to yield. Instead, they put three more runs in the scorebook to form a five-run buffer going into the sixth inning. Lukas Kubik walked and scored on his brother’s three-bagger. Both Zak Kubik and Wilson sprinted to the plate on pitches that got past the Bandit catcher. By the end of the inning, the Stars had stretched their lead to 11-6, and that score held through the last two innings. 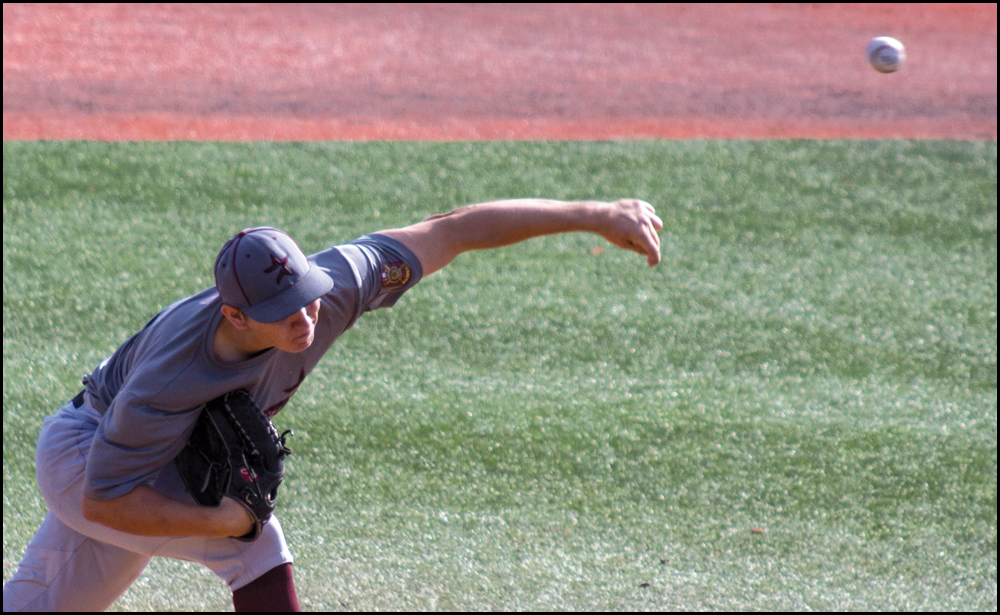