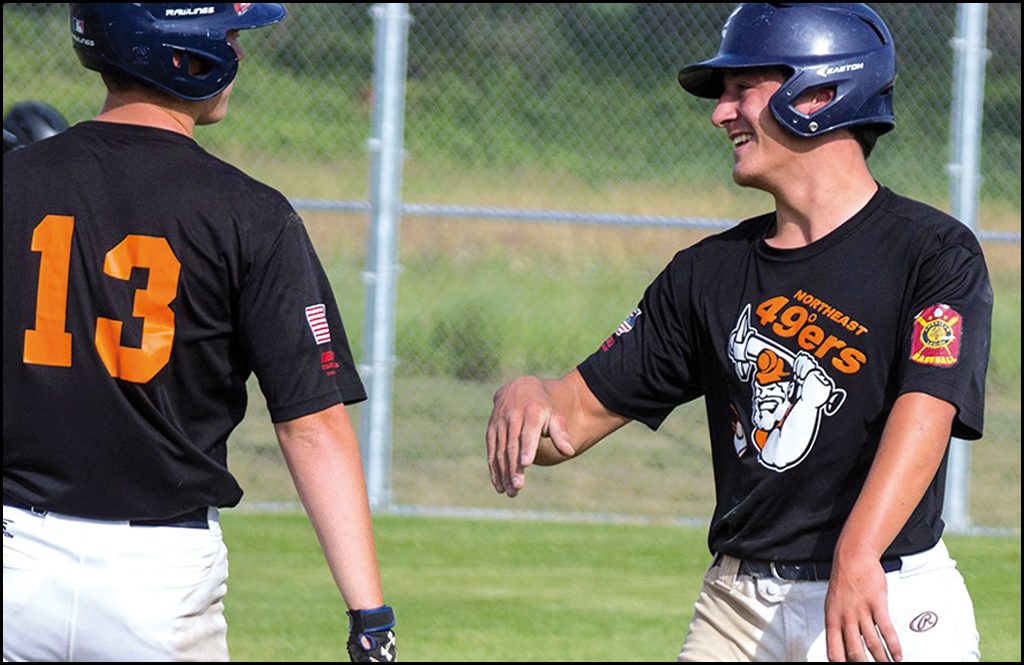 Exhausted Chewelah bats did not get their second wind until the sixth inning at Colville on Friday. After thumping 33 hits in wins over Cheney and Mead earlier in the week, fatigued Niner bats recuperated through the first five innings against the Indians. By that time, the home team had built a 7-0 lead, leaving Chewelah only two at-bats to close the gap, which they almost accomplished.

The Niners scored five runs in the sixth inning and three more in the seventh to narrow the Colville lead to 9-8, but they left the tying and go-ahead runs on the base as the late rally fell short.

“We were just one hit away from winning at Colville,” said Coach Tom Skok. “We had runners on base. We just didn’t get the hit we needed.
“Everything seems to be coming together at just the right time for us. Both our pitching and hitting have really improved.”

Friday’s loss ended an eight- game winning streak for the Niners who finished the league season with a 13-9 overall record, 13-6 in league action. One of those wins was a 5-4 victory over Colville, which was one of only two defeats suffered by the Indians this summer. Colville finished on top of the American Division of the Spokane American Legion AA League. Chewelah completed the season in third place in the division standings to earn a berth into the district tournament. Sandpoint came in second out of the 13 teams in the division.

The Forty-Niners will open the district tournament at Mt. Spokane against Mead on Thursday, July 18, at 5:45 p.m.

In all, over the course of the game, only two Indian runs were earned. The rest scored after Chewelah muffs extended play. The Niners finished the game with eight errors, which made the difference in the final score. Both teams had nine hits.

It was another Chewelah error in the bottom of the sixth inning that opened the door for Colville to add two more runs to the home side of the scoreboard as the Indians spread their lead to 9-5.
Chewelah was now down by four runs going into their final trip to the plate. Unfortunately, they came up one run short. Singles off the bats of Clay Jeanneret, Sam Triplett and James Macrae produced two runs, narrowing the gap to 9-7. Triplett then came home on an Indian infield error to make it a one run game at 9-8.

The Niners still had Macrae and Kade Frizzell on second and third bases with two outs, but both were left there as Colville held on for the 9-8 league win.

Jake Jeanneret and Triplett each had two hits for Chewelah. Middlesworth and Marang both batted in two runs.

Triplett was labeled with the pitching loss. He threw three innings, allowing six hits but only one earned run. Jake Jeanneret finished the game on the mound, yielding three hits and one earned run.

Chewelah 19, Mead 13
Those who watched the All-Star Game (yawn) on Tuesday night could have attended a much more exciting event that was not interrupted by countless commercials. The explosiveness of Independence Day fireworks lingered around the Barbour Complex for a few extra days last week until Mead visited for an evening doubleheader. The initial clash between the local Forty-Niners and the Panthers on Tuesday erupted into a three-hour battle that produced 24 hits and 32 runs and ended in a 19-13 Chewelah league victory. The second game was also won by the Niners by a 5-4 score to seal the two-game sweep.

A whiff of black powder and a spark of magnesium came off Niner bats as they stroked a season high 16 hits and scored 19 runs in the opening game. Four players — Jake Jeanneret, Bowen Middlesworth, Nick Skok and James Macrae—each finished the game with three hits, accounting for a dozen runs and eight runs batted in. Sam Triplett hit a pair of doubles and also scored three times.

Mead held a 7-2 lead until Chewelah came to bat in the bottom of the third inning. That is when Niner bats began to make solid contact with the ball with runners in scoring position. Doubles by Skok and Macrae, plus singles from Jake Jeanneret, Jake George, and Middlesworth, powered a merry-go-round rally that generated nine runs for an 11-7 Chewelah lead.

Hits in the fifth inning by Zach Bowman, Middlesworth, and Macrae added three more runs to the home side of the scoreboard. Jake Jeanneret, Skok, Macrae and Triplett in the final inning kept Mead from closing the scoring gap for the 19-13 league win.

Chewelah made good use of its bullpen, using five pitchers. They allowed only eight hits and eight earned runs while striking out nine Panther batters. Jake Jeanneret was the game’s winning pitcher.

Chewelah 5, Mead 4
Bowen Middlesworth’s inside the park home run headlined a 5-4 Chewelah win over Mead in the second game of the evening. The Niner right-fielder hit a line drive all the way to the fence in deep centerfield and rocketed around the bases to beat the throw to the plate. His run gave the home team a 4-0 lead after two innings.

Mead responded with three runs in the third inning to narrow the score to 4-3, but Cole Piepgras singled and scored on a one-bagger by Bowman to produce the winning run. The game ended after five innings because of darkness.

Bowman batted 2-for-2 with a run scored and a run batted in.

Clay Jeanneret threw all five innings for the Niners. He struck out five Panther batters.

Chewelah 10, Cheney 0
A walk-off walk definitely is not as exciting as a walk-off home run, but, in the end, it serves the same purpose. James Macrae was given a bases loaded base on balls in the bottom of the sixth inning on Thursday evening to seal a 10-0 shutout victory over the visiting Cheney Summerhawks.

The Forty-Niners entered the inning leading 7-0, needing to add three more runs to their side of the scoreboard to end the game on the 10-run rule. Singles by Jake George, Nick Skok, and Clay Jeanneret brought home two of those runs, and a walk issued to Sam Triplett loaded the bases. Macrae then accepted ball four, sending Skok home with the concluding run.

It was an overall good night for Macrae who threw the entire game, notching the three-hit shutout win on the mound. The young right-hander struck out six Summerhawks while walking only one.
George and Skok each hammered three hits for Chewelah and combined for five runs batted in and four runs scored. Altogether, the Niners swatted 11 hits, including a double and triple by Jake Jeanneret that batted in three runs.

Chewelah limited Cheney to only five baserunners, two of which made it to third base, but none scored. Niner catcher Clay Jeanneret picked one off who ventured too far from the bag. The other was left stranded.

The win was Chewelah’s ninth in a row and the Niners’ final home game of the season.

‹ Owls in NE Washington are a hoot › AAA LEGION BASEBALL: Northstars looking to punch their ticket to state tournament