A look inside the WIAA’s football seeding committee 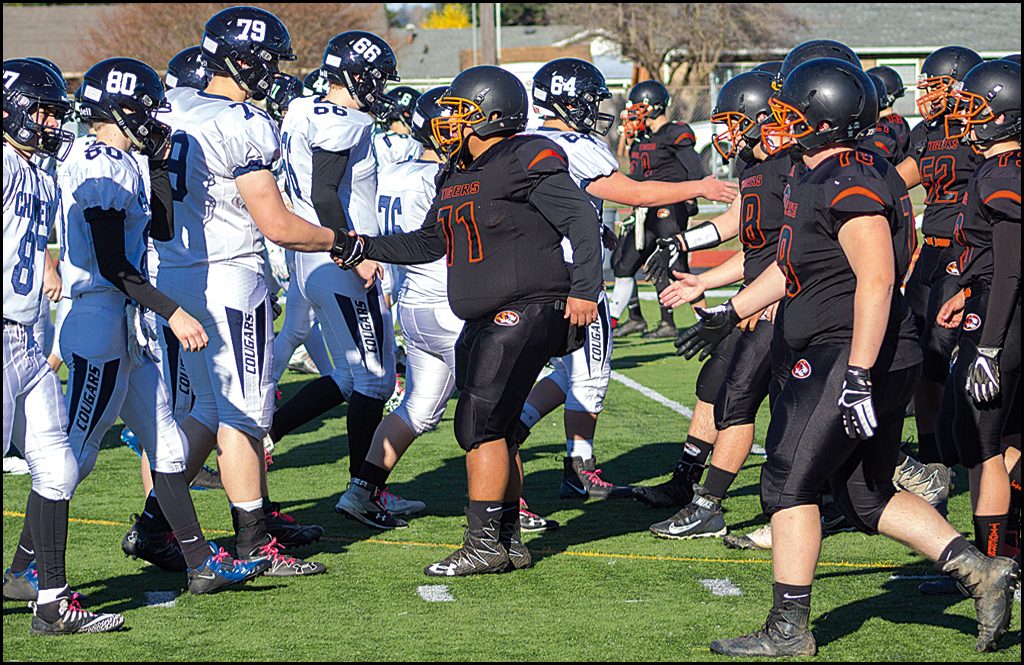 SOME OF THE MEN BEHIND THE NUMBERS: Committee will determine football team postseason roads…

Former Centralia Chronicle Sports Editor Aaron Van Tuyl is a man of simple means: he enjoys a good can of soup, his trusty bulldog Ralph, freelance stories for his hometown paper when he wishes and liquid kale.

And guess what? He has a strong say in the Chewelah football team’s postseason route if they make it that far.

For the second year in a row, the WIAA will implement seeding committes that will determine how everyone fits into the postseason bracket jigsaw. Changes this year include making a committee for every classification as opposed to the joint committees last season. Last year there were just three committees handling two classifications apiece. This year there will be six. On the 2B committee will be coaches Jon Davidson of Toutle Lake, Tom Sanchez of South Bend, Tim Rasmussen of Lake Roosevelt, Jim Holman of Asotin and the media guys. Along with Matthew Evans of Evans Rankings, both Aaron Van Tuyl and Ryland Specer of 247 Sports will be looking at what info they can to rank the best of the best small town football teams.

But… who are these guys?

“I don’t have any hobbies or friends so I spend a lot of time reading gamers and trying to find highlights online, and I keep really close tabs on the District 4 teams and try to get out and see every team with a shot at the playoffs during the season, and then do as much homework as I can on the rest of the 2B contenders in the last few weeks of the regular season,” Van Tuyl, who also enjoys comic books, said.

For Ryland Spencer, who is a guru when it comes to high school football, he takes sabremetrics to the next level. He attended 46 games in the first ten weeks of last season.

“Personally, I go overboard,” Spencer said. “I have spreadsheets that I keep to myself where I give a rating to position groups for almost every team in the state. It really helps me keep everything organized as I go throughout the year.”

Spencer added that everyone came into the committees well-prepared, and committee members even reached out to current coaches asking for film.

“My phone was ringing non-stop with other members wanting to get my opinion on teams so they were prepared,” Spencer said.

Chewelah reached the state quarterfinals last season after basically being an unknown going into their first year of 2B football. Spencer said while southwestern Washington has a bunch of 2B teams and ton of media to cover them, Eastern Washington does not. The Spokesman Review is the only daily newspaper for a large geographical area and while the Chewelah Independent covers what breakfast the football players have, it’s not exactly Sports Illustrated.

“The problem becomes trying to get consistent coverage for the Northeast, Central Washington and EWAC,” Spencer said.

Van Tuyl jokingly pointed out there was a homegrown campaign to rank Chewelah as early as week three in the season and while the committee had an eye on the Cougars, they didn’t know they were for real until Chewelah downed ranked Northwest Christian last fall.

“Anytime a top-5 team goes down the rest of the state notices,” Van Tuyl said. “There was a buzz before that but that win cemented their status as a team that wasn’t just farting around.”

Evans Rankings and ScoreCzar produce local computer algorithms to rank teams, as does Max Preps but in the end, the committee likes results and to give teams an eye test.

“The most important thing to me is film or seeing a team in person,” Spencer said.

The seeding committee seemed to do its job right last year as there was only one first-round upset in a seeded No. 8 and 9 game. The semifinals had all top five seeds.

“There really weren’t any major complaints about it, which means we’re probably due for some major screwups and blunders this year,” Van Tuyl said jokingly.

Last year there was bit a of questioning as Toledo and Chewelah shot up the rankings after big late-season wins but Van Tuyl noted seeding stock goes up more later in the season when ranked teams are established.

“It depends on your league,” Van Tuyl said. “One team that was a topic of conversation was an undefeated league champ in 2017 but got blown out in the first round by a lower seed, so you can’t rank a team entirely on a league title. If a team gets hot at the right time it might matter more.”

While the 2019 season is still weeks away, Chewelah is looking like a strong squad despite losing some valuable seniors. For Spencer, they’re near the top of his charts while other 2B squads suffered some big losses. Tri-Cities Prep lost star Kobe Singleton to transfer while Kalama will have to deal with the loss of Alex Dyer. The Loggers from Onalaska will still bring back one of the biggest linemen in 2B – 6’4” 245-pound Alex Frazier, while also having FB and LB Ashton Haight and QB/S Lucas Kreger.

Chewelah still has a nice backfield still with record-setting QB Jake Jeanneret and 2B All-State team MVP Kaden Krouse along with plenty of other returning starters.

The Cougars also loaded up their schedule this year with the 1A state finalists with champion Colville and runner up Newport on the schedule – perhaps in an effort to claim a nice strength of schedule. The team also seems excited as 26 JHS student athletes showed up to spring football camp which is the largest number they’ve had in recent memory.

So get your pens and papers out, we have a few months before the first kickoff so why not jot down some predictions and rankings to fill the gap of time?

EDITOR’S NOTE: Van Tuyl used to be my boss, and would constantly send me to Yakima to cover state softball while staying in hole-in-the -wall hotels, while he stayed at the Red Lion for state baseball. No, I am not bitter.

‹ FROM THE EDITOR: Thanks to all those logging dads in Chewelah › Remember When for June 13, 2019