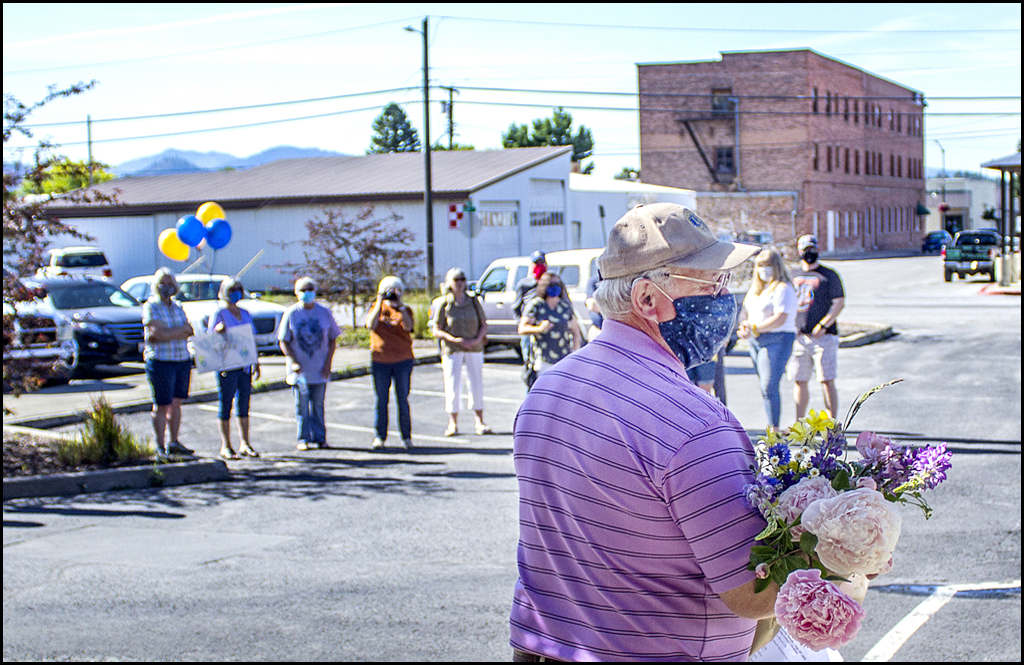 The community member learned after a Chewelah Chamber of Commerce Board meeting last Friday that he was the 2020 Honored Citizen of the Year. He characteristically had few works except thanks and praise to the community he has been a part of for many decades.

“It feels great to get the award but I feel there might be more deserving people out there, but it’s a good honor,” Ross said.

In the many letters sent to the Chewelah Chamber of Commerce, people said Ross was the go-to volunteer in the community. He was somebody who helped many local organizations with his leadership and organization skills. Ron Washington, so intent on getting Brian the honor sent his vote twice since “you probably already counted my vote as Lions President, do I get one as just Ron Washington, community member?”

Brian Ross is a 1970 graduate of Jenkins High School and spent many years in the timber industry. He learned the ins and outs of running heavy machinery and worked performing maintenance in Arden for several years at the mill before retiring in 2008.

Ross is a regular face at … basically everything. Ballgames, golf tournaments, fundraisers, community functions and he has been know to make an appearance at a BooFest or two.

Ross joined the Chewelah Valley Lions Club in 1994 and has served in basically every leadership position for the club through the years. This included being governor for the Lions Club for the district which spans Washington, British Columbia and Idaho.

“I traveled about 25,000 miles that year I was governor,” he said.
“Each of us has a story to tell about our Lions journey. We may take different paths, but the destination is the same: to serve and share a part of ourselves in commitment to one another, our community, our country and our world,” Ross wrote as the district governor for the Lions.

Ross, along with his wife Denice, have certainly done that in Chewelah. Ross has organized food drives for the Chewelah Food, helping out several local school functions, working with the Kiwanis, Lions and Chamber of Commerce.

“Brian is affectionately referred to as ‘Lion Brian,’ is involved in Lion’s Club International, well beyond the local level,” Bill and Kay Lupton wrote. “Denice has been a caring and skilled teacher for many years. She works with the fragile age of beginning students, K-2, and instil in them the desire to learn.”

If you’ve been to the Cork and Keg, City -ide Clean Up, Spring Home and Garden Show, Romp and Roar golf tournament or blood drives, you’ve no doubt seen Ross there doing something.

“As long as he is able, Brian Ross will be giving back to his community – Chewelah,” Lions member Jonni Graybreal said. “Like so many before him who have and continue to give to this community, he deserves to be recognized and honored for his commitment to serving others.”

Ross said he enjoys the wide variety of resources that Chewelah provides. If you want to go hunting, fishing or just check out the outdoors, there are plenty of options. Having a ski hill and golf course also means recreation is a feature in the community that never sleeps. Ross said that what is endearing about Chewelah is the pride people take in their community and how so many people try and give back with acts of kindness.

“Brian is the go to for the community as well as family and friends,” his daughter Rhea Ross wrote. “He is always willing to drop what he is doing to help out where needed, no matter what the circumstance may be.”

When it comes to the Lions Club, for which Brian has sponsored 25 new members during his years with the club, Ross said he enjoys meeting lots of different people from lots of different backgrounds from around the world.

“We recently went to the Lions’ USA-Canada forum, and I was able to meet eight different international Lions presidents,” Ross said.

Through the years, Ross has won several distinguished awards for international leadership and club building for the Lions.

“It’s an honor to join all the other people that have been honored citizens,” Ross said. “It’s a great group of people and I’m glad to have served with them all.”

While the COVID-19 pandemic will limit the honored citizen’s usual duties of being front and center at Chataqua and then marshalling the Chataqua parade, when things open back up, you’ll no doubt see him flipping burgers at a football game or helping organize the next latest and greatest event in Chewelah.

Until then, thank you Brian for your commitment to Chewelah.