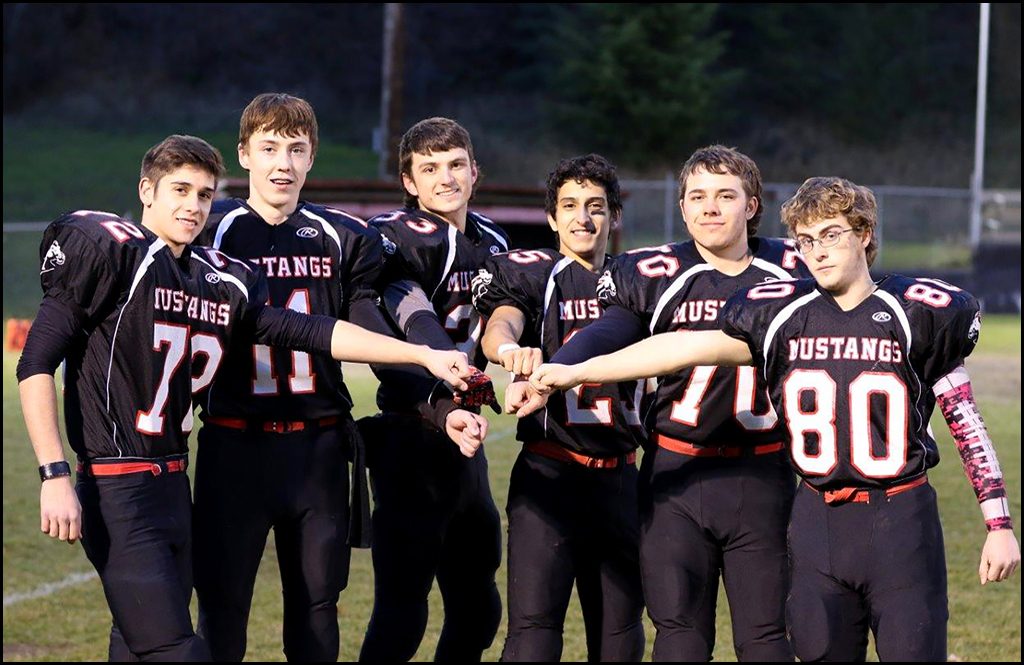 There are Senior Nights every year, but not one quite like the one Northport had on November 8. You see, these seniors were at the core of the 10-year-old program, making up the numbers to keep the roster playable and developing as the years went on.

“It means a lot, because we’ve had a lot of great memories throughout the years,” Rahif said. “I’ve learned a lot on both sides of the ball thanks to our coaches.”

Most of the season, the Mustangs had just 10 players to spread out on the eight positions on the field every Friday. This mean many of the seniors were out on the field for nearly every single play.

“It shows you how to get up after being down,” Sebastian “Seabass” Birley said.

While most schools have years of history to pull from, Northport’s football program has only been around for 10 years, meaning this senior class was making their own traditions.
Northport started the season 2-0 with a 41-40 win over Waterville and a 62-28 victory over Hunters for Homecoming, one of Rahif’s favorite moments.

Then injuries mounted, and Northport suffered losses to Republic, Springdale and Inchelium. It could have been easy for the short-handed Mustangs to hang it up, but they continued to play tough and give some of the league’s best teams a challenge.

“This has always been my favorite sport and I believe it is the best program in the league because it builds backbone,” Corcoran said.

Northport bounced back with a 40-16 win over Curlew on Oct. 11. League power Cusick came into town, and the Mustangs battled them to the end in a 38-22 loss. After a setback at Selkirk, Northport then defeated Wellpinit, which for a time was looking like the third best team in the league, by a score of 28-14.

Northport finished the season with 209 yards rushing per game with Malcolm leading the team with 876 yards and 12 touchdowns. Rahif had 484 yards rushing with six touchdowns while Ty Williams had 412 yards and three scores.

Williams was the team’s leading receiver, hauling in 21 passes for 489 yards and seven touchdowns.

Every senior on the roster has scored points, including a two-point conversion caught by Morgan Buhl this year.

“This year means a lot because we have built a team and family,” Tanner Malcolm said. “We have bonded and all play like a family. It was cool being able to start out in Jr. high because we all played and slowly got better.”

Malcolm said his favorite moments were throwing two-point conversions to the guys usually protecting him, Scotty Fata and Morgan Buhl. Malcolm passed for 856 yards this year and 11 touchdowns.

On defense, Rahif led the team with 102 tackles, while Malcolm had 55 tackles and Ty Williams had 53.

There were plenty of lessons to learn from their football experience, including:

“Never talk when the coach is explaining a play,” Buhl said.

“I have learned teamwork, what it means to be physical, self discipline, what is it to work hard and be your best in the game of football,” Corcoran said.

But perhaps the most important advice is from the quarterback. The Mustangs posted their best record since 2012, and showed that even when the odds can stack against you, you can make a pretty big statement.

‹ Board approves new staff contract, discusses building infrastructure › 2B FOOTBALL PLAYOFF PREVIEW: Everybody in Chewelah is asking where the heck Adna is