75 years ago, Allied troops started the liberation of Europe with D-Day 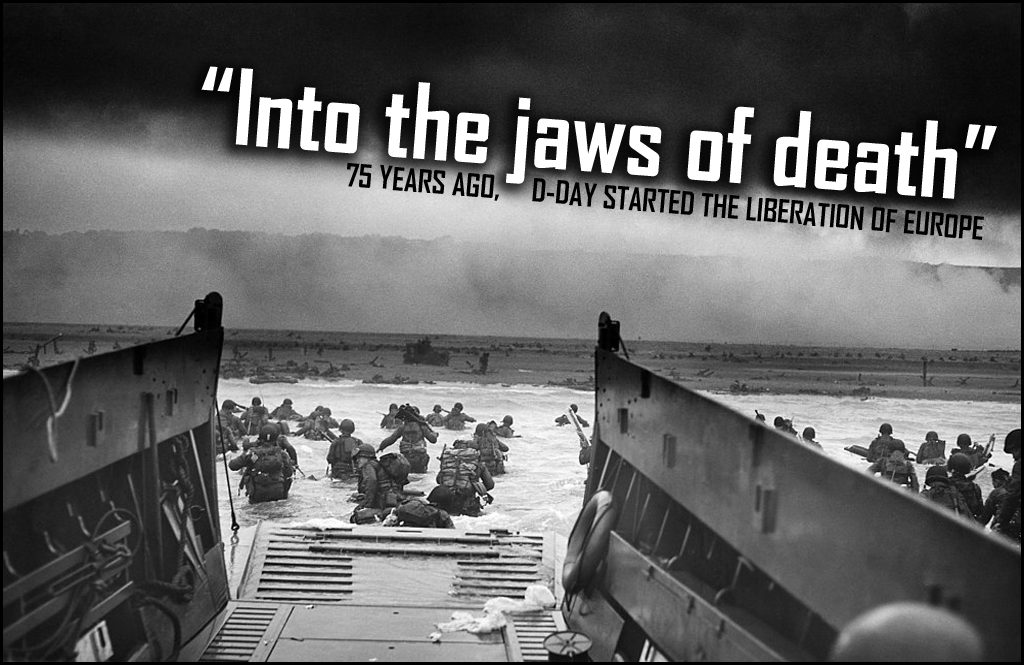 Men of the 16th Infantry Regiment, US 1st Infantry Division wade ashore on Omaha Beach on the morning of 6 June 1944

D-Day was the greatest sea invasion in history with over 5,000 landing and assault crafts…

Hitler’s forces were on the run in the east, had been hammered in North Africa and Italy had been invaded by the Allies. Still, the Atlantic Wall stood strong and a previous raid along the coastal wall by the Allies had ended in disaster.

General Dwight D. Eisenhower has prepared a speech for the invasion’s failure. Weather had caused the invasion to already be called off once and seas were rougher than expected.

And yet, they stormed the beaches. American, Canadian and British Forces performed the largest seaborne invasion in history. Invading by sea is one of the toughest military operations that can be presented and Allied forces did this against fortified German positions. The cost was great – with 10,000-plus casualties and 4,414 confirmed dead – and the cost would be great ahead. World War II actually got deadlier for Americans as the Axis Powers got closer to defeat.

Over 156,000 soldiers and 195,700 naval personnel participated in the invasion along with 5,000 landing and assault crafts with the target being a 50-mile stretch of land along the English Channel of French coastline. On D-Day, shortly after midnight, 24,000 airborne troops landed in France to begin the assault on Hitler’s forces. Operation Overlord had begun and in the morning American troops assaulted Utah and Omaha beaches while the British stormed Gold and Sword Beaches. The Canadians took on Juno Beach.

The Utah beach saw the landing craft land 2,000 yards from their intended landing zones but the area was a better attack point as there was only one German strong point as opposed to two in the Atlantic Wall. Air power heavily pounded the defense point and the current had washed away some of the beach obstacles the Germans had set up. The assistant commander of the 4th Infantry Division, Brigadier General Theodore Roosevelt, Jr., the first senior officer ashore, made the decision to “start the war from right here”, and ordered further landings to be re-routed. On the beach, the Americans landed 21,000 troops at the cost of only 197 casualties.

Omaha Beach saw the greatest resistance from the Germans, as many of the beach obstacles had not been cleared by bombers, currents swept crafts off their intended landing area and high cliffs made an excellent defensive position for the German strong points. Casualties were around 2,000 on the beach.

Allied casualties at Gold Beach are estimated at 1,000, casualties at Juno were 961 men at Juno, and as high as 1,000 men on Sword beach.

The invasion brought another front against Hitler, whose high command struggled to come up with a cohesive strategy to counter the landings. Arguments over how to deploy the German armored forces caused them to be mishandled. The next year, the Soviets would be inside Berlin and Hitler would commit suicide. After D-Day, the Americans and British would eventually free Paris and push into Germany.

With the Soviets treatment of eastern European countries after the war, one could say that Allied soldiers weren’t just freeing Europe from Hitler but also ensuring western Europe would remain free and democratic.

Ceremonies and memorials today mark the occasion that 75 years ago, the western powers faced the jaws of death in the name of liberation against an oppressive and fascist Nazi occupier.