1B FOOTBALL: Northport improves to 2-0 with win over Hunters 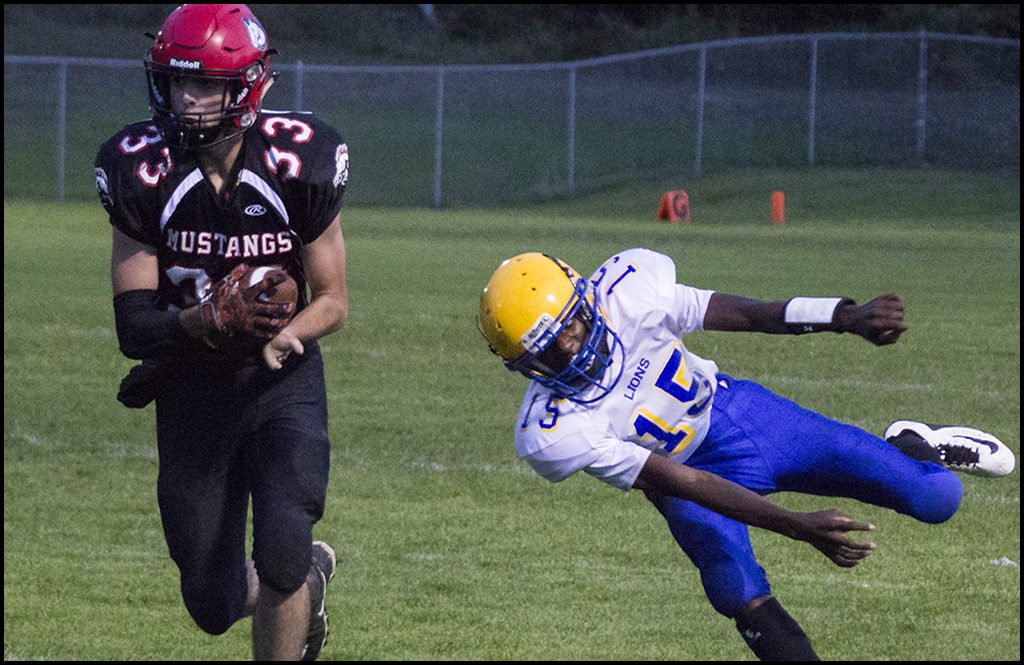 Ty Williams rushed for 211 yards on the ground for the Mustangs on Friday.

Northport’s Ty Williams went off for 211 yards on the ground, had 77 receiving yards and scored four touchdowns in the Mustangs 62-28 victory over Hunters in NE 1B North football action. Northport improved to 2-0 on the year and won bragging rights in Stevens County with the victory.

The first quarter was close with Williams’ 18-yard touchdown run being the only score as Northport took a 6-0 lead. Mustang QB Tanner Malcolm ripped off a 15-yard touchdown run in the second quarter, but Hunters answered back with a drive and a one-yard QB keeper by August Wagner.

Williams ripped off a 50-yard touchdown run to but Northport up 20-8 at the break. The third quarter, however, would become an absolute track meet as the two teams traded touchdowns about four minutes into the period.

Malcolm scored on a 10-yard touchdown run, but Hunter’s Wagner answered back with a 55-yard touchdown run the very next play from scrimmage. Northport regained the initiative with a 41-yard touchdown pass from Malcolm to Williams for the 34-14 lead with 6:41 left to go in the third. The Mustangs then recovered the onside kick, and Malcolm found Williams again for a 43-yard pass. Jahsom Rahif followed that up with a five-yard touchdown run for the 40-14 advantage.

But as eight-man football goes… Northport QB Malcolm found freshman Kalob Stachofsky, who caught the ball one-handed and then hauled it in with his elbow for the 48-20 advantage. The very next play Christian found Young again for another 50-yard touchdown pass to make the score 48-28.

That is how the game would finish, with Williams posting a whopping 388 yards of total offense, while QB Tanner Malcolm rushed for 61 yards and passed for 103 more yards. Rahif finished with 89 yards rushing.

Northport will host Republic next Friday at 7 p.m. while Hunters will host Curlew at 3 p.m.

CLICK HERE FOR A PHOTO GALLERY FROM THE GAME.

‹ 1B FOOTBALL: Selkirk’s Taylor scores two touchdowns in 80-6 win over Inchelium › 1B FOOTBALL: Springdale grinds out victory over Curlew